In the experience of All Language Alliance, Inc., many lawyers with clients who speak English as a second language will encourage their clients to avail themselves of the services of a competent legal interpreter when testifying at a deposition or during trial.  There are many reasons for this, one being that the client will undoubtedly feel more at ease when testifying in his or her native language and, in turn, will make a better and more credible witness.

In one recent case, the defendant’s counsel in a personal injury suit utilized the plaintiffs’ use of a Korean translator to call plaintiffs’ credibility into question during a jury trial. In Choi v. McDonald’s Corporation, Superior Court of New Jersey Appellate Division (decided June 14, 2016), the plaintiff suffered back, shoulder, and knee injuries when the chair she was sitting on at a McDonald’s restaurant broke, causing her to fall down. The plaintiff and her husband subsequently sued McDonald’s for negligence and sought damages for medical bills, pain and suffering, and loss of consortium.

At trial, both plaintiffs testified with the assistance of a Korean interpreter. During the trial, the injured plaintiff testified that she suffered a torn meniscus and a partially torn rotator cuff and had to undergo knee surgery. Various physicians also testified on behalf of the injured plaintiff and plaintiff submitted evidence that she incurred almost $100,000 in medical expenses as a result of the accident. At the conclusion of the trial, the jury found that the defendants were, in fact, liable for negligence, but awarded plaintiffs just $8,500 in damages consisting of $5,000 for medical bills, $2,500 for pain and suffering, and $1,000 for loss of consortium.

The trial judge denied the motion for a new trial. As to defense counsel’s remarks regarding the plaintiffs’ use of a translator, the trial judge found that defense counsel was entitled to raise credibility issues, whether or not the jury would believe them. The trial court judge opined that the jury’s low damages award was because the jury believed that the defendants were negligent and believed that the plaintiff suffered an injury but did not believe that her injury was as severe as she claimed.

Plaintiffs appealed the trial court’s refusal to grant them a new trial. On appeal, the plaintiffs alleged, among other things, that the trial judge committed four reversible errors, one being that the court failed to intervene when the defense counsel made allegedly inappropriate remarks during closing arguments about the plaintiffs pretending to need a Korean translator. The appellate court rejected this argument, finding that no miscarriage of justice occurred as a result of the statements made in defense counsel’s closing argument. The court reasoned that according to Diakamopoulos v. Monmouth Med. Ctr., 312 N.J. Super. 20, 32 (App. Div. 1998), “counsel is to be given broad latitude in summation.” The court explained that “attacks on witness credibility are permissible during summations” and that conclusions, no matter how improbable, are permissible so long “as they are at least potentially supported by the evidence in the case.” The court held that despite the plaintiffs’ arguments, the defense counsel’s comments during closing arguments were not type of misleading and accusatory language that would warrant a retrial.

Up Next: Legal Translation of Disclosure Statements 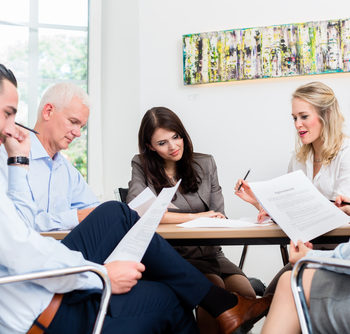